From Ieper take the N 369 towards Boezinge and Dikesmuide. A few minutes after Boezinge you will come across a large metal cross on your left. This is the Franco-Belgian memorial to the gas attacks of April 1915. You will now see a café on your right. Park here. 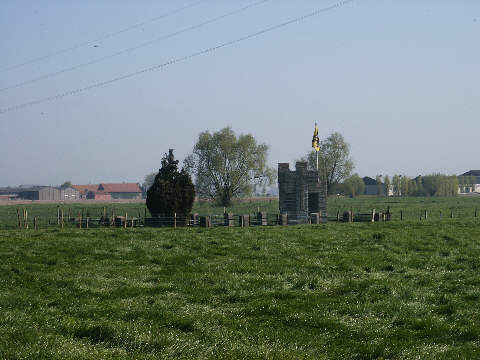 The monument to the Van Raemdonck Brothers

Edward and Frans Van Raemdonck, were born at Temse in 1895 and 1897. Although they were too young at the beginning of the war, they enlisted as volunteers. Importantly for their story, both were members of Flemish nationalistic organisations at a time when those who governed Belgium tended to be Francophone. This was also true of the military where (in simplistic terms) the majority of officers were Francophone, whilst a large proportion of those under their command were Flemish.

By 1917 the two brothers had been promoted to the rank of Sergeant in the 6th Company of the 24de Linieregiment (24th Infantry Regiment) which was holding this area of the trenches on the right of the Belgian Army.

On 26th March 1917 they were required to cross over the Ieperlee Canal on a prisoner taking patrol against a German position known as the Stampkopstelungen.

In a hail of bullets Frans fell and nothing could prevent Edward from trying to get him back.

More than two weeks later the two brothers were found together, alongside another soldier: Caporal Aimé Fiévez (a Walloon — French speaking Belgian). The bodies were badly decomposed and it was decided to bury them near the site, on 13th April. Although three crosses were erected, it was not long before only one remained as the shelling continued to plough the land.

Five months later when the area was once again in Belgian hands the three soldiers were reburied and given a stone cross. Stories about the two patriotic brothers were recounted and a mythology concerning the two arose, aided by a drawing by Flemish nationalist Joe English (who would be killed in the last year of the war) which showed the brothers dying in each others’ arms.

In their home village a stone memorial was raised, sculpted by Karel Aubroeck (who also worked on King Albert’s memorial at Nieuwpoort).

In 1921 a pilgrimage was organised to their graves and in 1924 they were exhumed and reburied in the Belgian Military cemetery at Westvleteren. The three burials, in just the one coffin, being placed under the central headstone of the three.

Then on 21st August 1932 they were exhumed once again during what was now the 13th IJzer pilgrimage and re-interred in the crypt of the IJzertor. 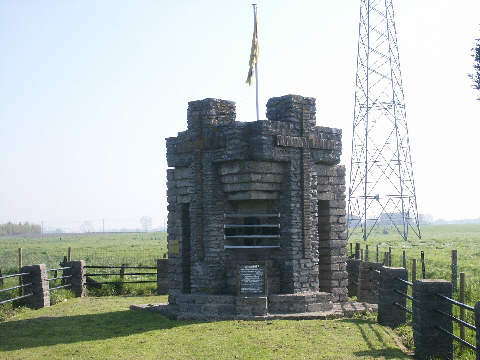 The monument was inaugurated on 19th August 1933 and is situated in what would, at the time, have been no mans’ land. It is constructed from blocks from the Stampkop itself.

The fencing around the memorial was created by the blacksmith from Temse : August De Bondt.

26th March 1917. Here fell, in each others’ arms during a night attack on the Stampkot, the two war volunteers Edward and Frans Van Raemdonck from Temse, both sergeants in the 6th Company of the 24th Infantry. Here also fell, at the same time, Soldat Aimé Fiévez of Calonne, from the same Company. 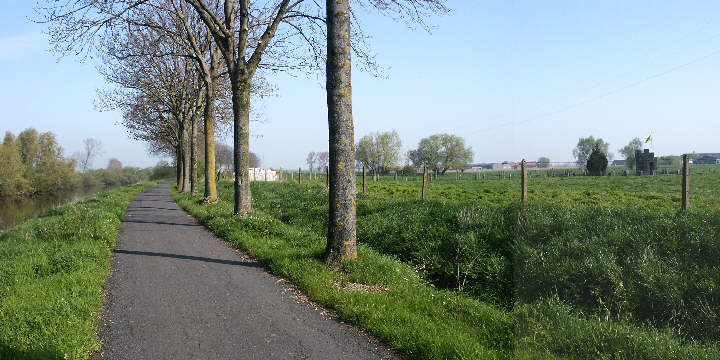 The canal on the left and monument on the right

Other memorials in the area