Long before the Battle of the Somme opened on 1st July 1916, the British Commander in Chief, General Sir Douglas Haig, optimist that he was, issued warning orders to the First and Second Armies, to the north of the proposed battlefield, to the effect that he might require of them a programme of extensive large scale raids in order to deceive the enemy as to where the main blow was to fall.

By the 5th July Haig felt that the time was right to seek out a breach, elsewhere in the German line. Haig believed that the Germans were on the point of cracking on the Somme and asked Generals Monro and Plumer (First and Second Armies) to look for suitable locations.

Facing the northern end of the Aubers Ridge was Lt General Richard Haking’s XI Corps. He had fought here in 1915 as a Divisional Commander and now as Corps Commander had already proposed a scheme on 9th May (ironically the anniversary of the original failure at Aubers) to use his Corps and that of the Australians (in Second Army) on his left, to seize and hold the ridge.

Haking was subsequently given permission to consult with the Australians with a view to taking the idea further. When in July they received Haig’s request, Plumer felt that an action around the Ypres salient would be impossible and Monro’s preferred alternative was Hill 70 in front of Lens. British intelligence, however, suggested that the Germans were moving men to the Somme from Lille so Haking’s proposition was the most suited to threaten the city.

On the 11th July the modifications began. Haking was no-longer required to seize the ridge. All that was required was a three day artillery demonstration with a few raids thrown in to gather intelligence. A heavy, continuous bombardment would be enough, it was argued, to make the Germans fear the possibility of a major action. The proposed date of commencement was the 15th July.

Things then took another direction when on the 13th July, Haig’s Deputy Chief of Staff, Major General Butler held a meeting with Monro and stated that the bombardment should be accompanied by an infantry assault. First Army would provide two Divisions and the Second an Australian Division. The artillery from three further divisions would be provided in support. 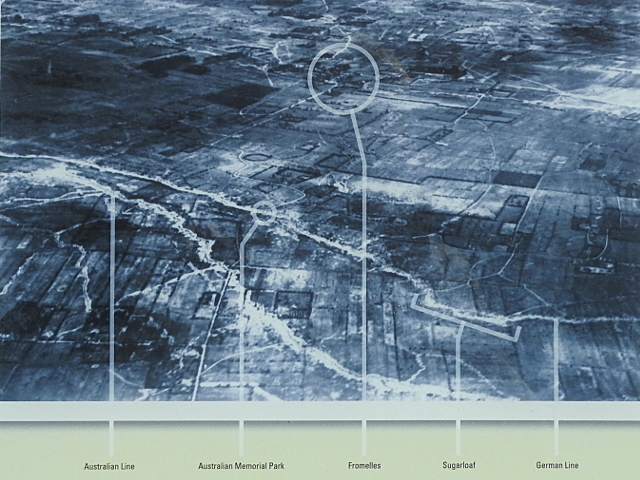 The difference in distance between the lines can be seen from this photo at the Australian Memorial Park.
Even the untrained eye will note that there is no visible German second line

Within twenty-four hours that plan had to be changed because Second Army had to withdraw one of its planned artillery divisions and at this stage Haking discovered that the 5th Australian Division, who had only been in France a matter of weeks, had neither knowledge of the ground in front of them nor any trained Trench Mortar personnel. With the wire-cutting bombardment already underway Haking reduced his proposed assault in width; from five to just over three kilometres.

On the Somme, progress was being made around Longueval and Haking felt confident that, with the weight of artillery available to him and the depleted and weakened state of the German defences in the sector, that his assault would achieve its purpose of reaching the enemy’s front line and support line trenches.

On the 16th July Butler was back at First Army Headquarters at Choques. Haig did not wish the infantry attack to take place unless it was considered that the artillery preparation had been adequate and that sufficient munitions were available to not only get the men to their objective but also to keep them there. Further more, intelligence now suggested that there was no requirement for the attack to be launched as planned the following morning.

Looking along the German line. The Sugar Loaf would have been to the right of the photograph
The Flags at the park mark where the German trenches cross the road
The right hand building is Delaporte Farm and behind is Fromelles church in the distance

Haking defended his plan and was most emphatic that he had the weapons and men needed to carry out the task. He then turned the tables on Butler by suggesting that unless there was some real reason why his operation should NOT take place the arrangements should stand as they were. Butler conceded the point but made himself quite clear that this was a limited operation. Even if highly successful, Haking’s men were not to go gallivanting off into the distance.

As Haking issued his final orders, it began to rain. Butler, realising that this could put a spanner in the works, went back to Choques and spoke to Monro’s staff (the General being absent). It was within Monro’s remit to cancel or postpone the attack if the weather or any other reason made it necessary to do so.

The constant rain forced Haking to postpone his plans and by the 18th July he was on the point of cancelling them altogether when Monro received a message from Haig. If weather permitted and all the assurances that had been given still stood, the attack should take place the following day : 19th July 1916.

At 1915 hours that night Haking issued his order. The final bombardment would begin at 1100 hours and the infantry assault would commence at 1800 hours.