Hooghe is pronounced more akin to Hoe-ge than Hoo-ge or Huge.
The British spelling is Hooge and you will see that on the cemetery as well as in the title of the museum.

After about 3.5 km, and as you come up a hill, you will see the Hooge Chapel Museum on your left and the CWGC Hooge Crater Cemetery on the right.

A little further along on the left is the modern Hooge Château — now a hotel. The original château was situated behind its current location.

There is ample parking in the area including within the château grounds. 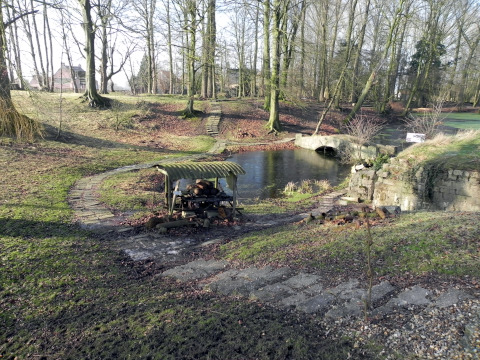 Part of the short walkway around the crater location.
There is a small donation to be made in the box at the entrance.

In mid October 1914 the British Army arrived at Wipers as it became known to the British soldiers and prepared to fight. A few kilometres out the Menin Road is this small village of Hooge. By 25th October 1915 The German Fourth and Sixth Armies were pressing hard to reach the sea. The 1st Battle of Ypres had begun (Ypres in French but Ieper in Dutch and on the Belgian road signs). 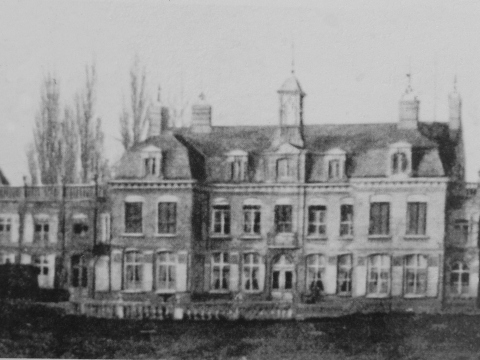 The de Vinck family Château before the war

During that battle, on 31st October 1914, the Château was being used by the 1st and 2nd Divisions’ Commanders for their joint HQ.

At 1315 hours whilst Major Generals Lomax and Monro were holding a conference the German artillery started shelling the château, scoring direct hits. Both generals were injured (Lomax dying a few months later) as were a number of important members of their staffs.

By the end of the battle in November 1914 the Germans had been checked but the front line now ran around the hamlet of Hooge. 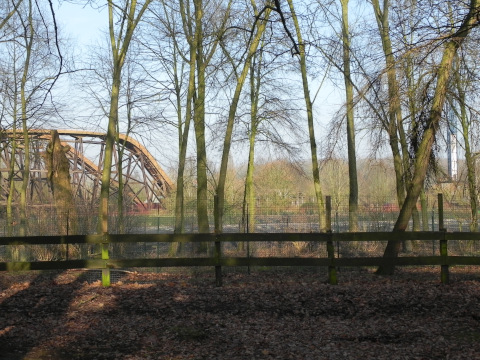 The water slide is situated over a much fought over complex of German trenches.
The Château was just off to the right.

The original château was situated behind the current building when looked at from the road side. For months the Germans had been seeking to gain the château and the stables which had been stoutly defended by the British throughout. You can think of the stables as being just to the left of the car park.

On the 2nd June 1915 the Germans bombarded the château and stables throughout the morning, leaving little of either standing. Their infantry then assaulted the British positions taking all of them. A counter-attack was launched but this only regained the stables. 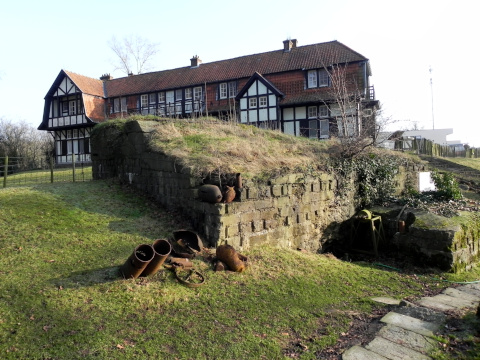 The modern building is much closer to the Menin Road

The results of the days combat left a situation where, as a rough guide, the front line came up from the south across the road and into the current car park. At the hotel it flexed backwards through the pond/crater and back across the road. It then stayed on the far side of the road as it cut through the top of the CWGC cemetery where it then rejoined the main road, continuing westwards and down the hill for about three hundred metres before heading north again.

In the grounds of the château was a German strong point which was proving particularly troublesome. As trench warfare had become the new way of life so ancient siege methods had been brought into play by both sides. One method of forcing a breach was by tunnelling under the enemy position and detonating enormous mines under their positions. The 175th Tunnelling Company of the Royal Engineers were brought in to dig a tunnel sixty metres long ; targetting the German redoubt.

The water table in this area is very high and the clay expands as soon as it comes into contact with the air. Different techniques were required of the tunnellers according to the structure of the ground they were working in. In this case the tunnellers needed to be adept at a technique called clay kicking.

Despite the dangers of working so close to, and even under, the front line many workers volunteered because the pay and working conditions were preferable to their lives in Britain.

At 1900 hours on 19th July 1915 the mine was detonated. At about 2,200 kg it was the largest mine so far detonated during the war and was a complete success, creating a hole some six metres deep and almost 40 metres wide. Men from 4th Battalion Middlesex Regiment rushed in and secured the far side of the crater. Together with men from 1st Gordon Highlanders they succeeded in pushing the Germans back about 250 metres before running out of grenades. The German artillery responded making life difficult and the British were forced to pull back a wee bit. 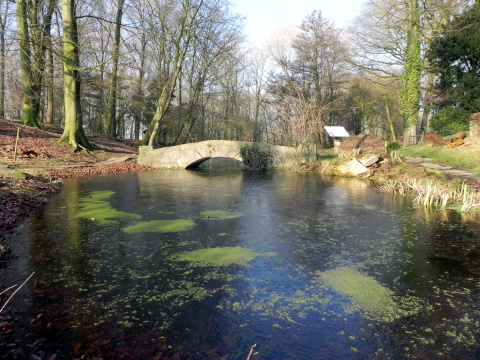 The peaceful pond is in fact formed by later mines

All in all though, the operation had been a complete success. Without any preliminary bombardment to warn the Germans they had been taken completely by surprise.

It is ironic that a year later on the first day of the Somme, 1st July 1916, there was an unwillingness to detonate the great mines early because the British tended to make a poor show at capturing the lip of the crater. Perhaps the generals were right because the early detonation of the Hawthorn Mine ended in failure and dire consequences along the entire Somme front.

The Germans at Hooge would not, however, simply let things lie. When the retaliatory attack occurred on 30th July it brought with it a new weapon : flamethrowers.