To the north west of Verdun is the commanding ridge of Vauquois. The entire area of this part of France is a series of ridges with those of Vauquois and Mort Homme guarding the valley leading down towards Verdun.

The site is important because it is one of the few places that you can see the results of constant mining on the terrain. Vimy is impressive but the story of Vauquois also contains the total destruction of the village.

The site is seven kilometres south of Varennes en Argonne via the D 38, which is the same road that leads passed the memorial site of Mort Homme, on the Verdun battlefield (a mere half an hour away by car).

It is only a dozen or so kilometres from a number of important American battlefield sites including memorials in Varennes, Cheppy, Montfaucon d’Argonne and the ABMC Meuse-Argonne Military Cemetery. 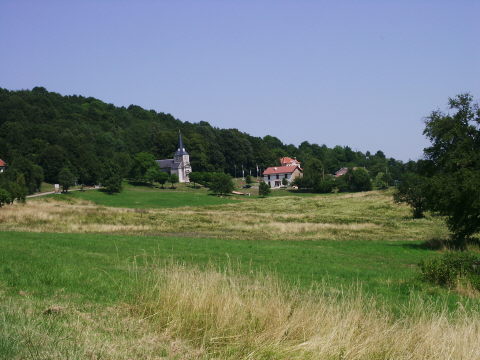 The Germans dig in 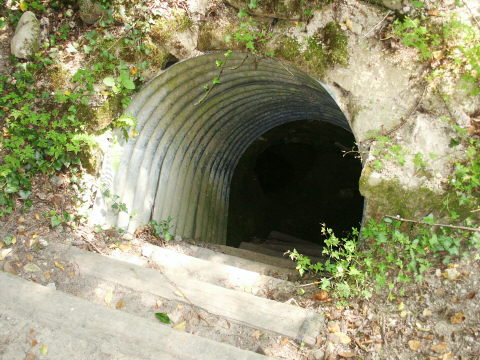 During their initial advances in 1914 the German army had found itself on the Butte de Vauquois on 24th September. They immediately set about turning their position into a stronghold as further west the Battles of the Marne and Aisne had resulted in the beginnings of trench warfare and the Race to the Sea. 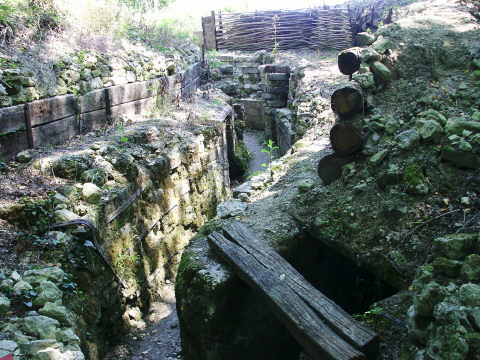 On their arrival the small village of Vauquois still nestled on the ridge — the modern day village has been rebuilt on the southern slope.

For five months the French tried to get a foothold on the crest, advancing, bayonets fixed, in their red and blue uniforms without the benefit of artillery support. Losses were of course colossal. 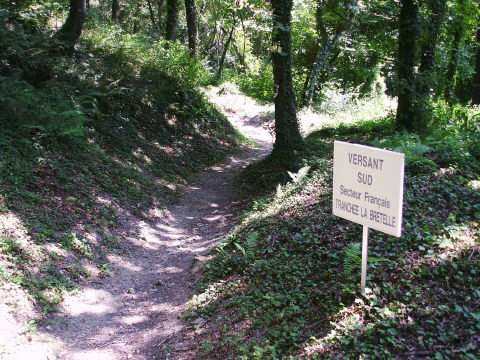 Part of the French lines

Eventually in the middle of March 1915 General Vaidant’s 10e Division d’Infanterie managed to hold, and dig in, on the southern side of the village.

Stalemate above — Digging below

From this time onward the war at Vauquois would be fought almost entirely beneath the ground. Engineers from both nations tunnelled and dug as they provided shelters and galleries.

On 3 February 1915 the French detonated a mine under the German lines as part of their attacks on the village. 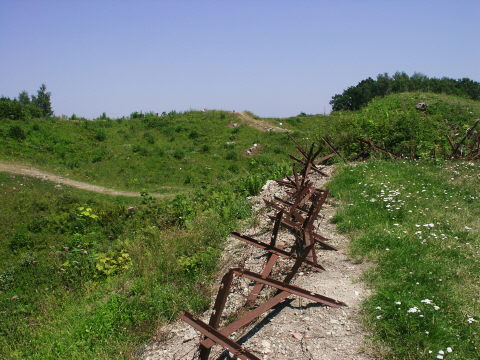 Looking across the crest of the hill

Once the front had stabilised, digging under the enemy’s lines began in earnest. Thousands of tons of rock were slowly removed from the mound to make way for kilometres of galleries.

The French had the slightly harder task as they were forced to dig vertically before driving shafts under the hill. These shafts were all named after Parisian Metro Stations. 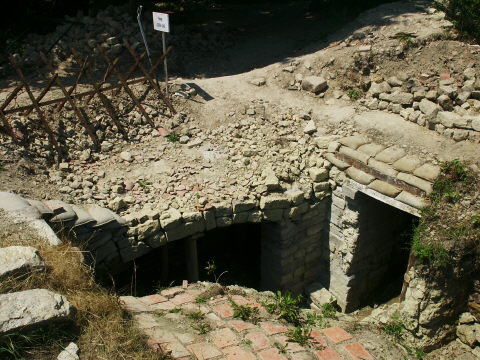 Entrance to a French shelter

The first mines that were detonated tended to be reasonably small and not very deep. Considered ineffectual the trend moved towards ever larger and deeper mines until on 14 May 1916 the Germans detonated 60,000 kilos of explosives under the western end of the ridge. This enormous blast ripped out the entire section of the hill, creating a crater some ninety metres across and twenty-five metres deep. It killed the entire sector garrison of 108 French soldiers. 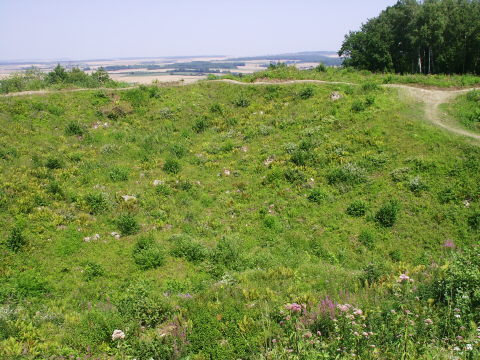 From the middle of 1917 the French started detonating smaller but deeper mines. These camouflets were designed to destroy the German’s tunnels but not rip up the landscape any further.

Whilst both are the results of detonating explosives underground the basic difference is that a camouflet does not create a surface crater. Small camouflets were often detonated next to enemy tunnels in order to disrupt their work. 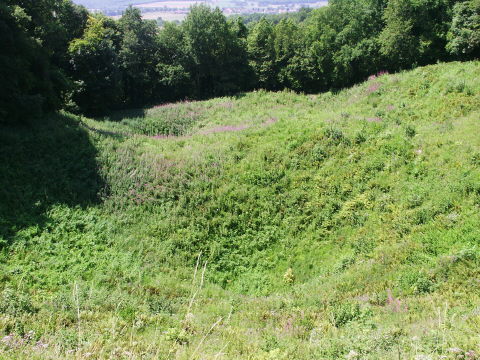 The mine torn hill — now softened by time and nature

During the struggle for domination of the hill the French detonated three hundred and twenty mines and the Germans a hundred and ninety-nine.

Neither side actually made any gains at all.

Today you can walk amongst the mine craters and gaze in awe at the massive hole from the May 1916 blast. It is about eighty metres across and twenty metres deep.

The trenches are, in places, only a stones throw apart.

It is beyond our understanding how anyone managed to sleep in them knowing that below, tunnellers, as quietly as possible, were working to bring death and destruction to those above.

In fact the stress became so bad that both sides moved towards an agreement whereby they only blew each other up in the early evenings. Despite such an agreement it is reckoned that 8,000 men who fought and died in the trenches were never found again. 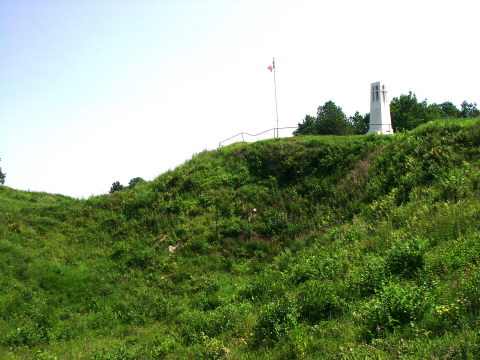 Looking up from a crater towards the monument

As the mining continued the village disappeared and the landscape began to resemble something from the moon. When the 138th and 139th US Infantry Regiments of their 35th US Division advanced into the sector on 26 September 1918 all they found were the present day holes in the ground. The village of 168 inhabitants had long since disintegrated. 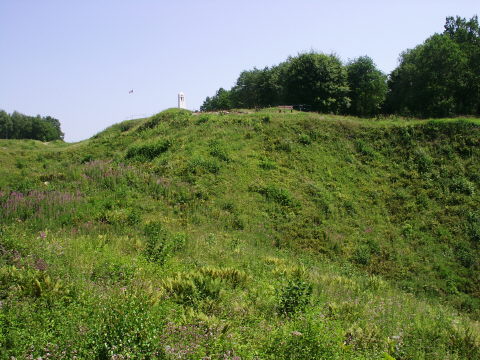 Some of the craters are enormous 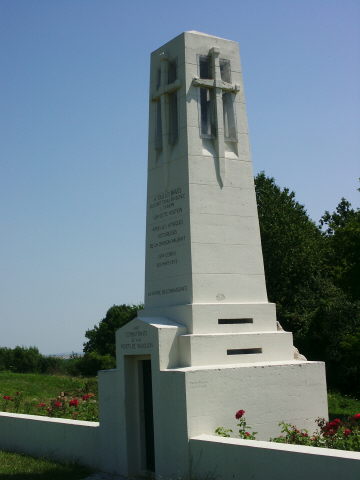 On top of the mound is a memorial overlooking the French lines. It is dedicated to the combatants and fallen of Vauquois. Inside is a lantern. 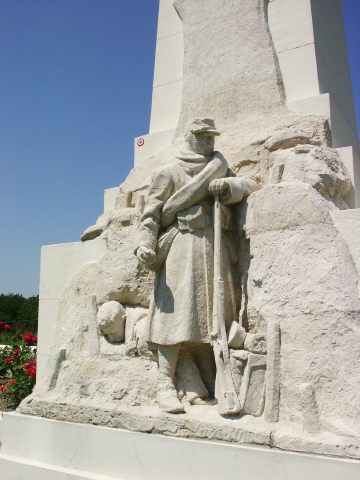 Carved on the rear face of the monument is a French soldier, grenade in hand. Behind him you can see a distinctive tree which was used as a registration marker by the French artillery.

The site is now a French Heritage Site and looked after by the Friends Of Vauquois. The mine craters themselves are freely open to the public.

A car park with information boards can be found at the foot of the mound along with a few pieces from the narrow gauge railway which the French used for supplying their troops in the galleries.

Guided visits of the French and German installations are available through the Association but need to be organised in advance. 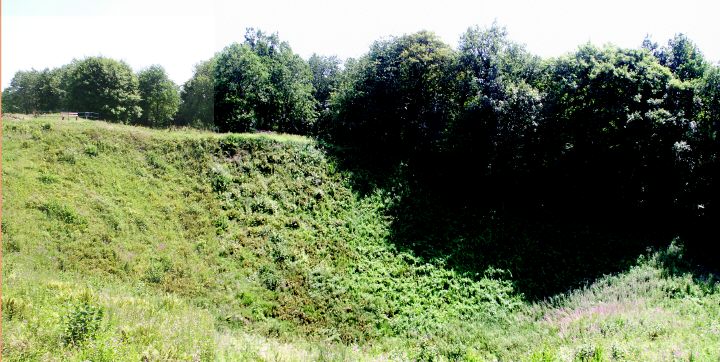