The advance to Le Quesnoy

On 27th September 1918 the Canadian Corps breached the German defences at the Canal du Nord at Marquion allowing the British First Army to continue its advance towards Cambrai. To its south the Third Army crossed the dry section of the canal (it had not yet been finished) and pushed on towards the Canal de l’Éscaut.

The Canadians at the Canal du Nord

The New Zealand Division (IV Corps) had been waiting in reserve on the opening day of the battle but had not been required during the first forty-eight hours.They then re-entered the battle zone in front of the Bonavis Ridge (which had featured greatly throughout the Battle of Cambrai in November-December 1917).

By 5th October the fall of the Hindenburg Line to the Fourth Army, to their south, forced the Germans back from the canal and over the next two weeks the New Zealanders pursued them as far as Briastre. Some German units continued to defend well, making the pursuit both difficult and dangerous. It is important to remain in contact with a retiring enemy but there is a fine line between harassing them and walking headlong into a fortified position.

After a short break out of the line the Division returned to the front for what would prove to be its final battle. The capture of Le Quesnoy.

The encirclement of the town

The general objective for the Third Army on 4th November 1918 was the high ground running from Locquignol, through the Forêt de Mormal, and on to Frasnoy and Jenlain (Famous today for its brewery) where it joined with the First Army.

The major obstacle for IV Corps was the fortified town of Le Quesnoy with its civilian population still within its walls. Formerly a Spanish/Austrian citadelle the structure was improved by Louis XIV’s chief engineer Vauban and subsequently enhanced over the years as munitions and siege tactics changed.

The decision not to attempt a direct assault on the fortifications was an easy one and the plan was for the New Zealanders’ 3rd (Rifle) Brigade to flow around the town. At this stage of the war the strength of the Brigade had been reduced to slightly under a thousand men—about a third of its theoretical strength.

The evening turned wet and it continued to mizzle until 0300 hours. The Germans intermittently lobbed shells into the New Zealanders lines as if to emphasise the fact that, although they might be withdrawing elsewhere, at Le Quesnoy they were going to make a stand.

At 0530 hours the Allied barrage opened and three hundred barrels of burning oil were projected up onto the western ramparts putting up a massive smoke screen. 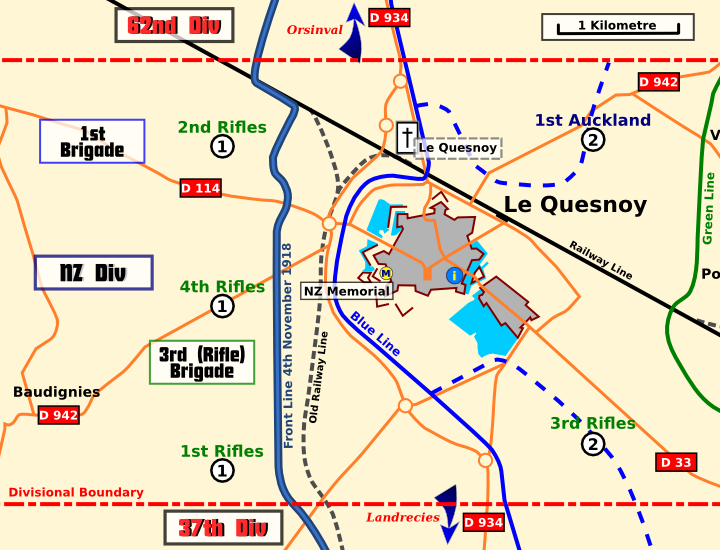 On the right the three companies of the 1st Rifles (none of the attacking battalions could muster more than three) advanced on the Landrecies Road to the south of the town. A nest of machine guns accompanied by a 77 mm field gun within an orchard posed some problems but Lieutenant H Thompson and his riflemen managed to kill or capture the gunners and take possession of the guns.

A rather unusual escapade befell the reserve company of the 1st Rifles who had taken up a position along the railway line. On their right the Germans were attempting to counter-attack the 37th Division who were held up in the area of the chapel at the Le Quesnoy/Ghissignies crossroads (now a roundabout).

The Germans, having been repelled, chose to make their way back to Le Quesnoy via the railway line—not realising that, by then, their own flank had collapsed. Although the situation could have turned nasty for the Rifles the Germans were persuaded to surrender.

In the centre of the disposition the 4th Rifles advanced on the railway embankment (approximately where the ring road runs today) and then, having passed over it, the outer defences of the citadel.

On the northern side of Le Quesnoy the railway junctions formed a triangle and the emplacement allowed the defenders to cause the 2nd Rifles some problems. A gap formed between the companies immediately opposite the lower junction and here the Germans had a machine gun post which caused considerable casualties until overcome.

By 0620 hours the Orsinval Road had been reached and the battalion had linked up with the 62nd Division on their left.

Part 2: The Investment of the town